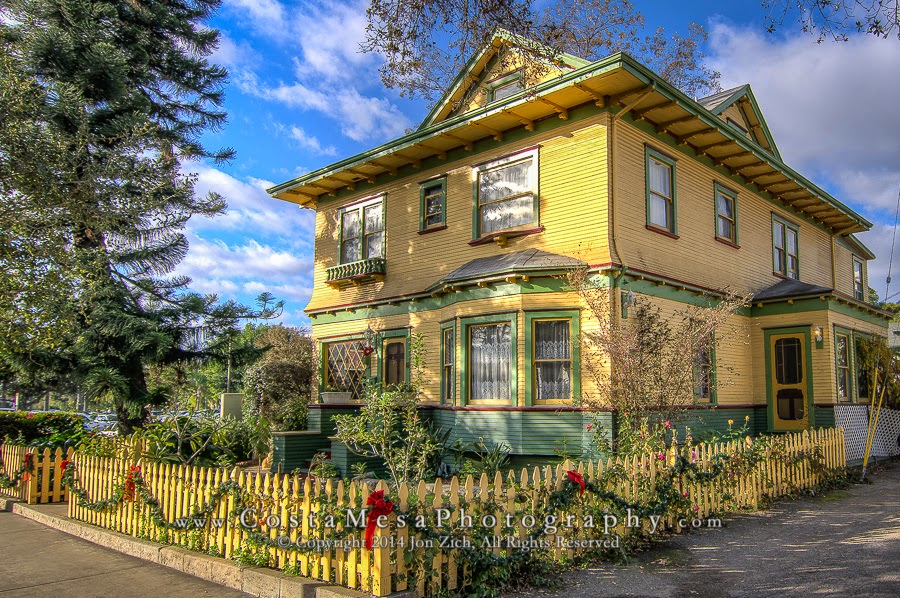 The French Park Historic District is a 20-square-block residential district northeast of downtown Santa Ana. Its streets are lined with large homes built during the late 1890s and into the 1920s and has a variety of home styles, including Victorian, Craftsman, Colonial Revival, English Tudor and Spanish Colonial Revival. This area was designated a local historic district in 1984 and renamed the French Park Historic District. It was put on the National Register of Historic Places in 1999.

It was in 1877 that William Spurgeon, J. H. Fruit and James McFadden, three of Santa Ana's most prominent citizens persuaded the Southern Railroad to extend its line from its terminus at Anaheim to Santa Ana. By the time the tracks were laid a year later, their company had plotted a 160-acre tract called Santa Ana East. It was located parallel to the railroad tracks.  A portion of this property was later subdivided and became Flatiron Park (now known as French Park). 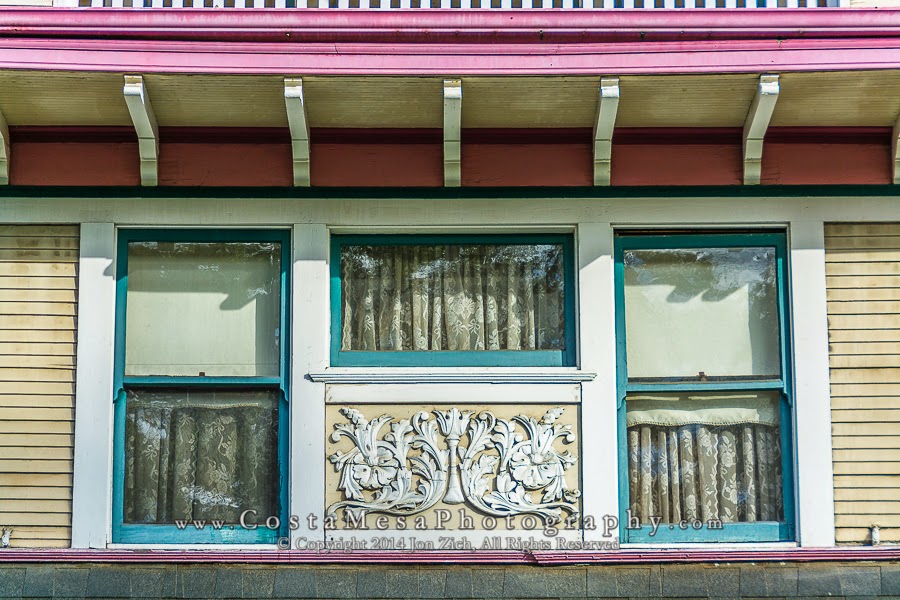 The movement to preserve and restore the French Park neighborhood began in the late l970s. A new group of people with an appreciation for old houses began to move into the neighborhood. They organized the Historic French Park Association in 1980 and began working with the City of Santa Ana's Housing Services Division to upgrade the neighborhood. 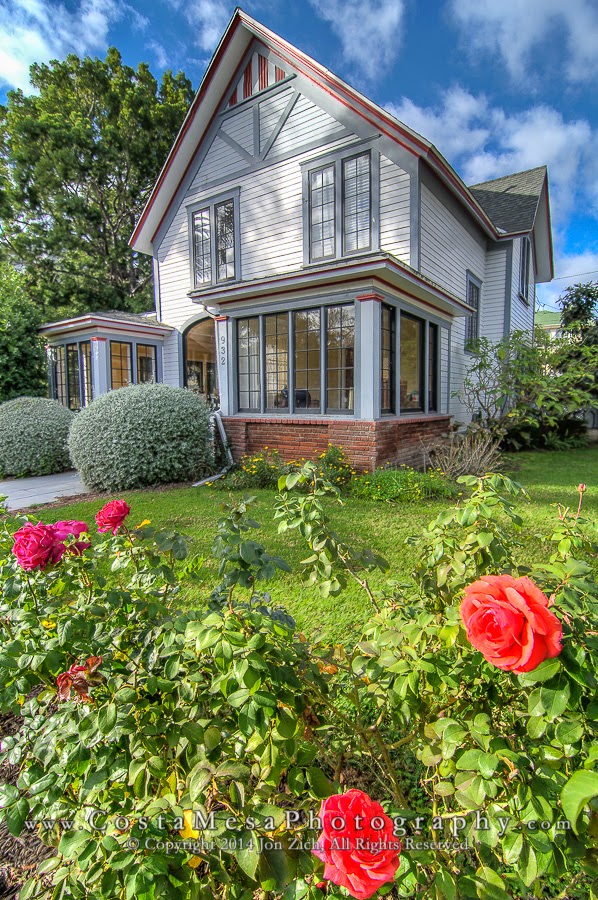 This was my first visit to this part of Santa Ana.  I needed to be in the area this morning and extended my visit to include my own walking tour and photo shoot.  It was a beautiful crisp and sunny morning; quite for a Monday given the holiday week, but buzzing with the occasional gardener’s equipment and a few neighbors out for a stroll.

I hope you enjoy looking at these images as much as I enjoyed seeing and creating them.

ARTIC weather here, in the middle of a heat wave?? 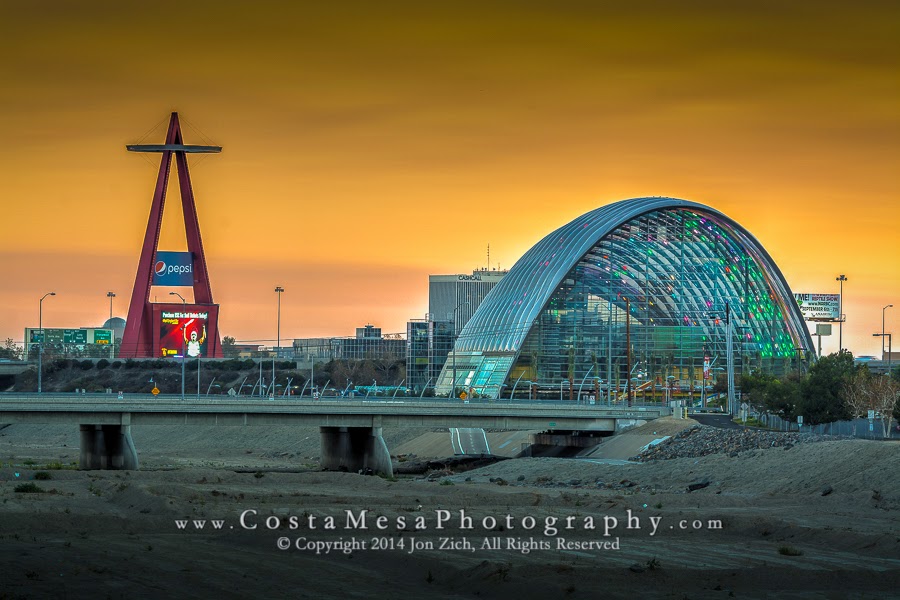 Well yes, sort of.  You see, ARTIC stands for Anaheim Regional Transportation Intermodal Center.  I think it’s one of those acronyms that was dreamed up before they put all the words to it…  Anyway, it’s been under construction for quite some time, and I’ve been watching the progress of that construction with great interest on a weekly basis each time I ride my bike up the Santa Ana River Trail.


Lately, the ARTIC had been taking shape (pun intended I guess given its unusual architecture), particularly the multi-colored lighting on the interior—which also happens to be visible from the exterior through the translucent building panels.  The ARTIC is now open later so I thought it was about time to plan a shoot and show off its beauty, as well as its proximity to Angel’s Stadium (the “Big A”), and the Honda Center (previously known as “The Pond”). 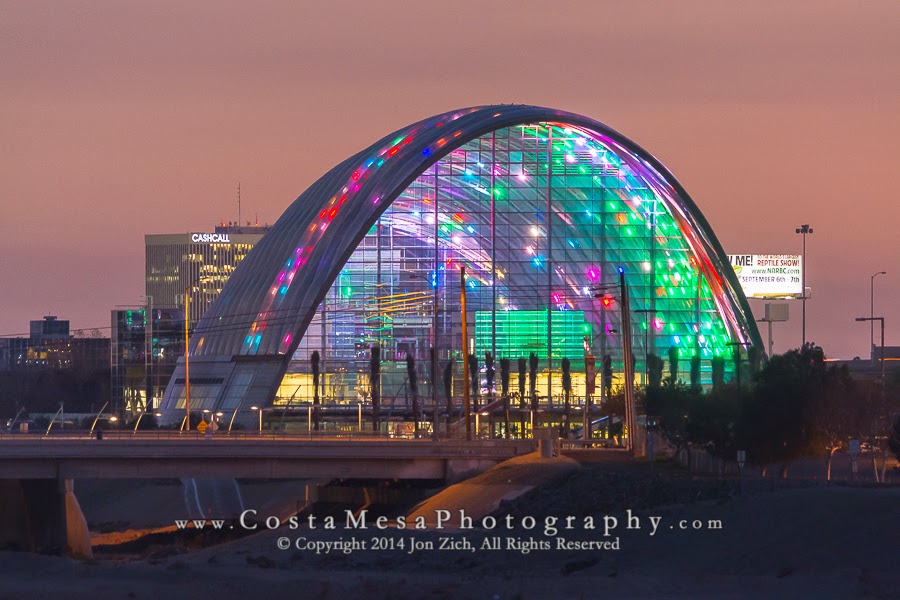 My planning involved several major components…where to position myself to get the desired composition, when to be there to get the best combination of lighting, and how to get to that point with the least amount of walking, and with the greatest amount of safety—the Santa Ana River Trail can be a bit dicey after dark.  I settled on my plan and scheduled my outing.  The results speak to a combination of shoot planning and the exquisite architecture of the facility. 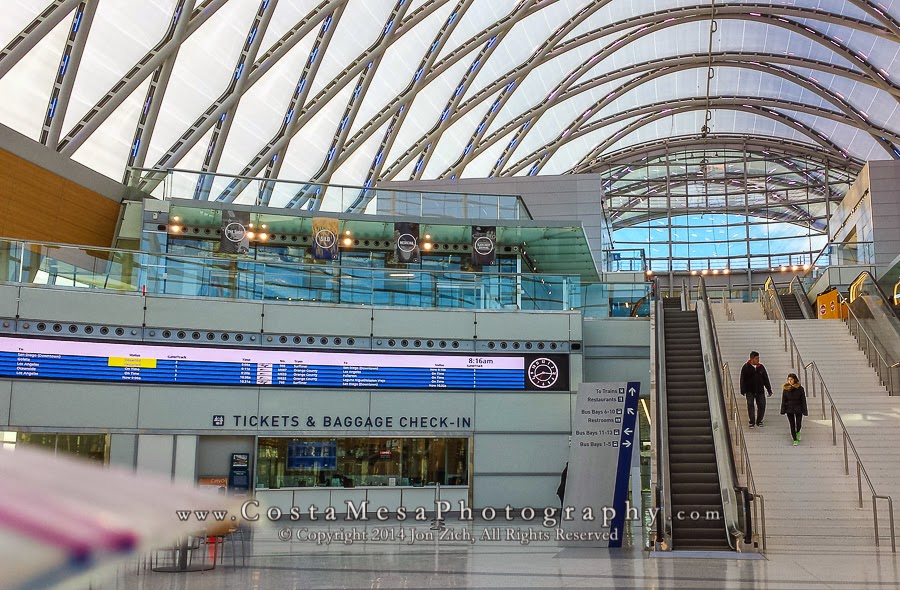 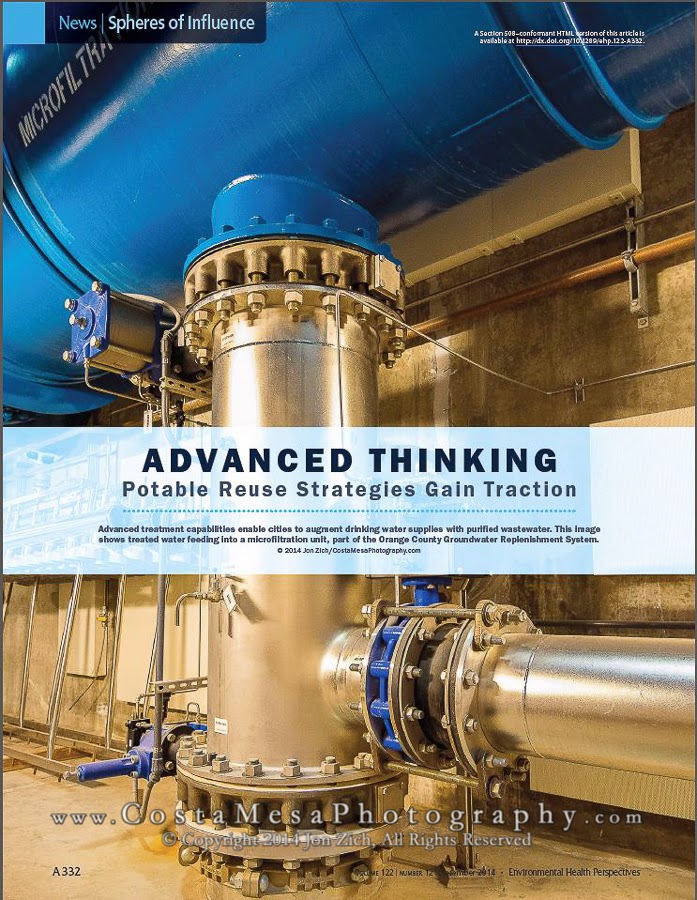 It’s been a busy and exciting month for photography.  My latest update is that two of my photographs have been published by Environmental Health Perspectives in their December Journal.  According to their website, Environmental Health Perspectives is a monthly peer-reviewed journal of research and news published with support from the National Institute of Environmental Health Sciences (NIEHS), National Institutes of Health, U.S. Department of Health and Human Services. The mission of EHP is to serve as a forum for the discussion of the interrelationships between the environment and human health by publishing high-quality research and news of the field.

Back in October I went on a photoshoot with another friend to the OCWD Groundwater Replenishment System facility.  The Orange County Water District is responsible for managing the vast groundwater basin that provides most of northern and central Orange County’s drinking water. As part of our groundwater management, OCWD maintains one of the world’s most advanced managed aquifer recharge systems to replace the water that is pumped from about 400 wells belonging to local water agencies, cities and other groundwater users. The most recent improvement to the District’s recharge system is the completion of the Groundwater Replenishment System in Fountain Valley.  This system now provides purified water sewer water via a 13-mile pipeline that terminates at two recharge basins.  This project, which began purifying water for recharge in January 2008, is a new source of very high-quality, locally-controlled water for year-round recharge.  This is particularly important now that other sources of imported water that have historically been relied upon for recharge, such as the Colorado River and the State Water Project, are becoming increasingly scarce. Because this facility is so new and modern, and the topics of water use and conservation getting increasingly important, I was contacted by eps regarding the use of my photographs to accompany an upcoming article.  Below is a screenshot from their website’s homepage.  It features one of the two photographs they were interested in (you can see they gave me credit in the upper left-hand corner).  Below that is the cover photo for their article (and although it’s hard to read in this screenshot, credit is shown in the center, below the title).  I’ve attached their pdf-published article which makes for some interesting reading!

If you’re interested in seeing my entire photo collection from the shoot, you can at:  http://www.costamesaphotography.com/Categories/OC-Water-District/ 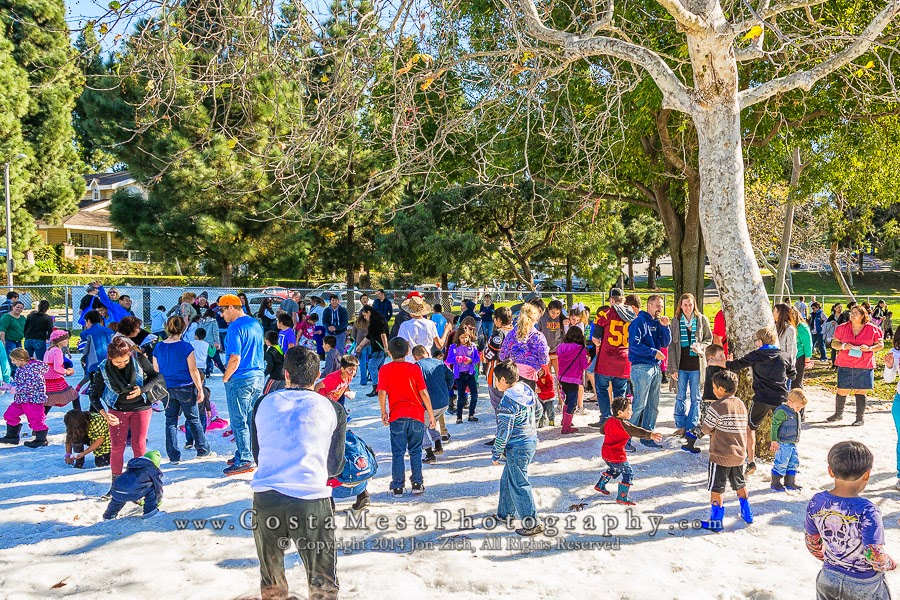 Yesterday was “Snow Land 2014”, an annual event put on by Torelli Realty for the children and families of Costa Mesa.  It was the first time I’ve been there, and I was there this year as the official event photographer.  Although I don’t have a true count, there must have been easily over 1000 people there based on the number of photographs I took of children with Santa Claus! The count of smiles and laughs had to be in the tens of thousands!! 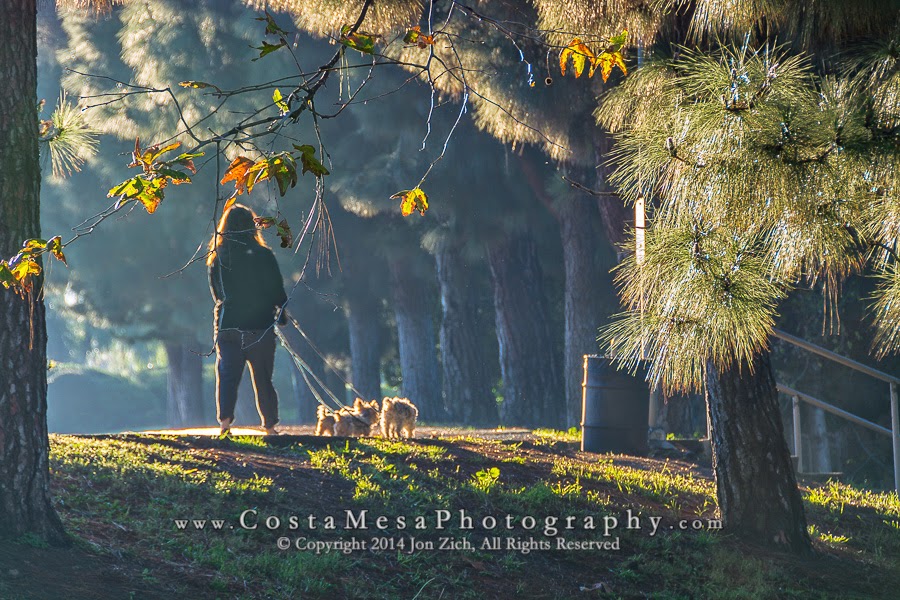 One of things I used to tell people that I enjoyed about refereeing soccer games was that I was literally out in the middle of the action, feeling the drama, and seeing up close the faces of determination, effort, and either the jubilance or disappointment of results.  I had this same sense when photographing a wedding for a niece several years ago, and I had it again yesterday when sitting up close and personal with all the children as they sat with Santa Claus as they whispered their Christmas gift wishes to him.  There were some unbelievable smiles of joy and happiness, quizative expressions of uncertainty, and the occasional horrified screams and crying—and that was just from me!! 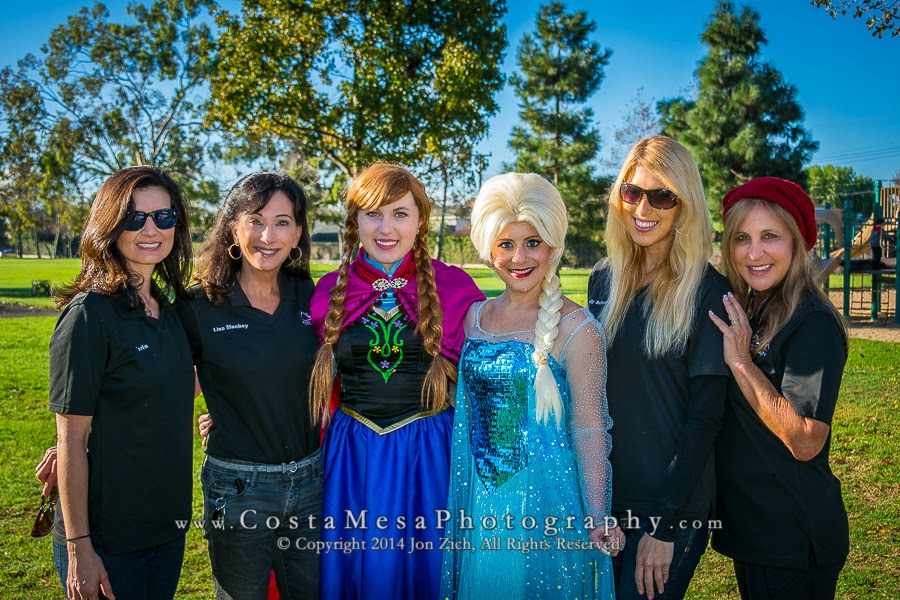 Last week we had some big rains forecasted, but very lucky for us the rain came Thursday and played itself out by late Friday leaving nothing but blue sunny skies for the event on Saturday.  An outside company was at the park at the crack of dawn spraying a large play area with a blanket of snow.  When I arrived, the trucks were just pulling away having left a fantastic play area for the children that were to arrive soon.

Also being set up when I arrived were a number of canopies and tables for various organizations and groups there to support the event.  There was face-painting, cookie-decorating, music from a DJ, music from a live-performing band, snow cones and other snacks, holiday decorations for sale, an inflatable bounce house…and I’m sure I’m missing other activities—all packed into a three-hour winter carnival! 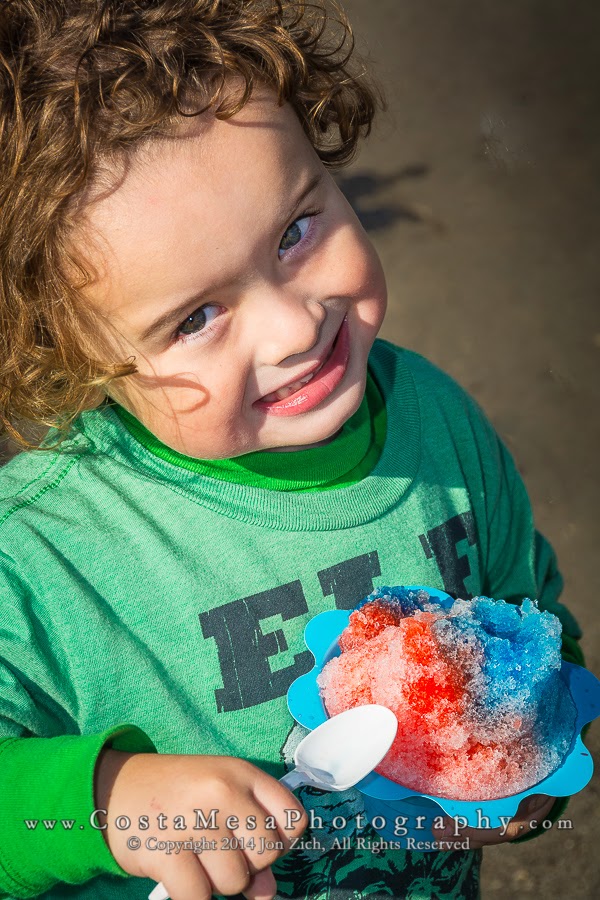 My job was mostly to capture photographs of the children with Santa Claus, but there was enough time before Santa arrived for me to catch some of the snow play and other activities.  Again, being in the middle of all that excitement and fun, and being able to observe others enjoying it was a real treat…much like it was for parents who were there enjoying their own children.  The cool thing is that all of the photos with Santa Claus are being provided at no cost to the parents as part of the overall event—which itself was totally free to everyone!  Below are just a few of the photographs I created which will give you a sense of the overall experience.  I had a blast.

Oh yah, I just noticed something else when pasting in the photos… The Snow Sisters from Frozen were there!  (actually, I don’t know too much about them, but I’m told the line to see them was as long or longer than the line to see Santa Claus!!) 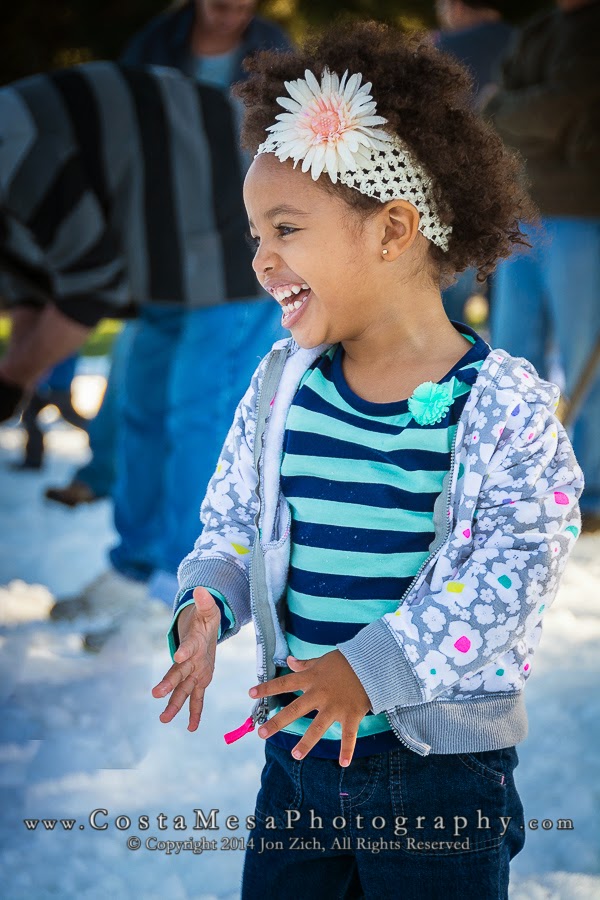 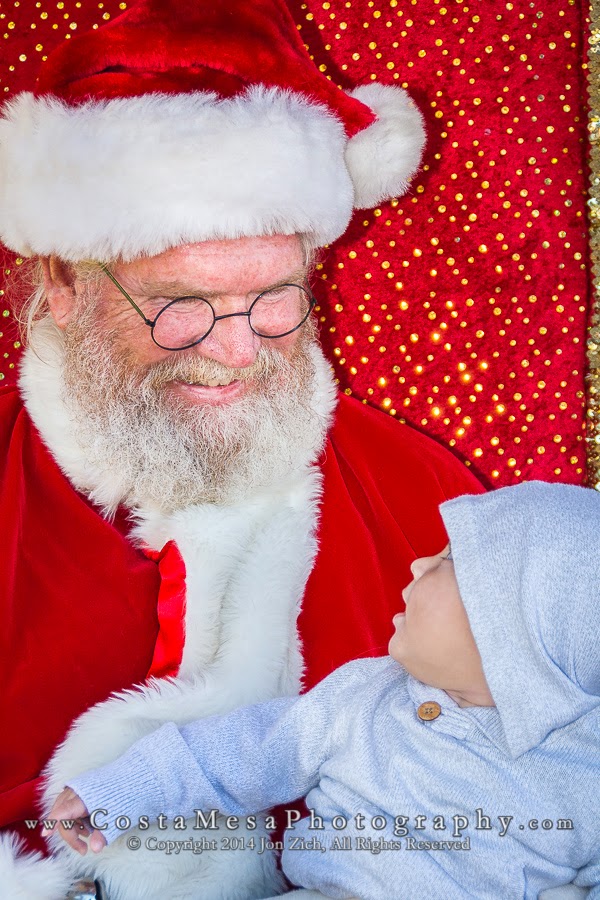 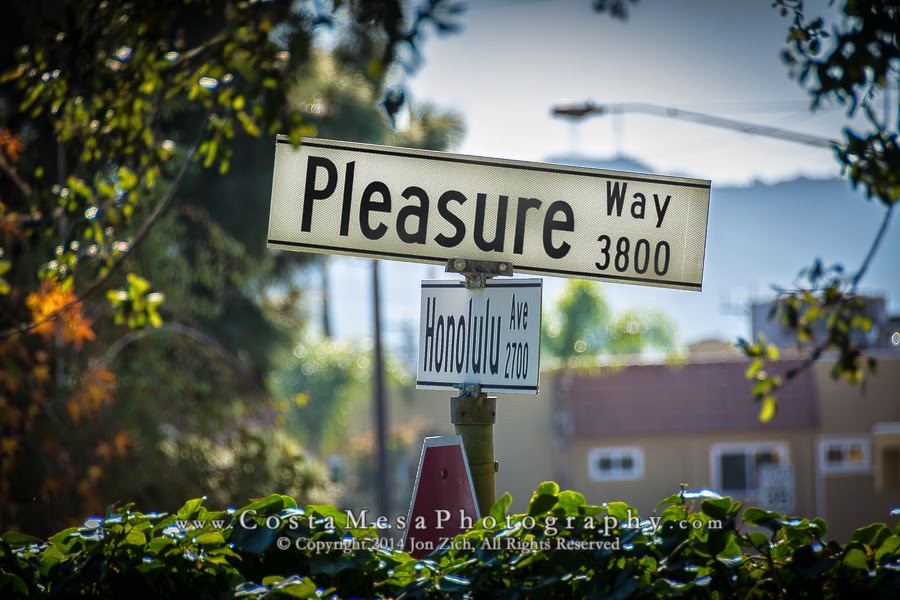 The story of Rockhaven Sanitarium began in the early 1920s, when a young nurse named Agnes Richards was troubled by the treatment of mental patients, particularly women.  In 1923, Agnes purchased a small rock house in Verdugo City (northwest of Pasadena) and began Rockhaven.  With only 6 patients to start, Rockhaven was a small place, run by women, for women.  The unique and dignified approach to treatment attracted many others which necessitated expansion.  Buying neighboring houses allowed for that needed expansion as well as land upon which to build new facilities. 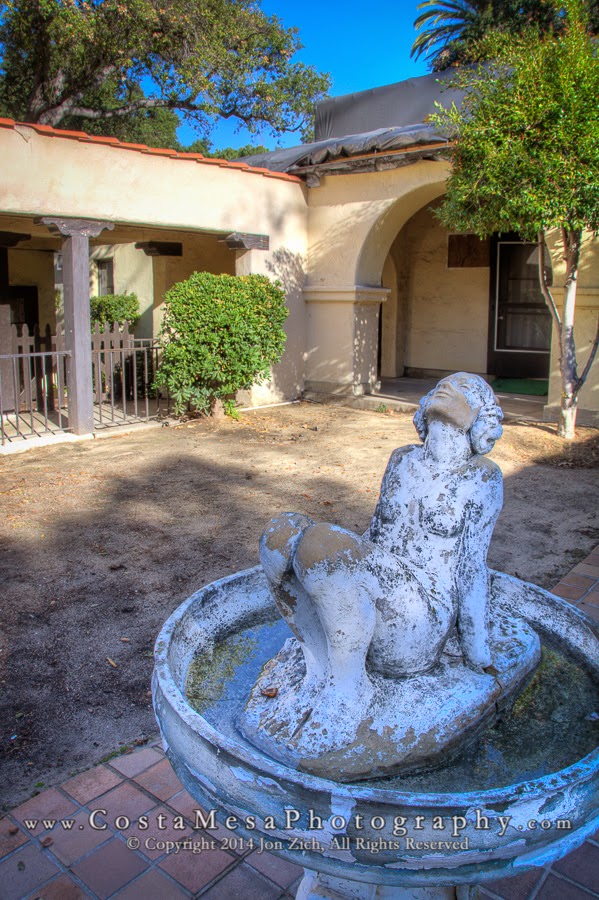 In the 1950s, Agnes’s granddaughter, Patricia Traviss, took over running Rockhaven, and later brought in Ivan Cole who transformed the grounds into gardens full of flowers and foliage.  In 2001, after more than 50 years at the helm, Patricia Traviss closed down Rockhaven and sold it to a developer.  Not wanting to see the site torn down, the City of Glendale purchased the site in 2008 with the objective of preserving the 3.5 acre site for public enjoyment.

One of our photo club members helped make arrangements for a number of us to have access to the site this morning for photography.  As one walked the grounds and through the various buildings, it was easy to image the tranquil life that the women of Rockhaven must have enjoyed.  From a photography standpoint, the poor condition of the grounds and structures contributed to some very interesting images, but for the public to fully enjoy Rockhaven, much works need to be done. The Friends of Rockhaven is a 501(c)3 nonprofit organization that generates support for increasing awareness of the history of this important local sanctuary.  They utilize volunteer labor to maintain and repair the site and would welcome any support (financial or otherwise) if you are so inclined. 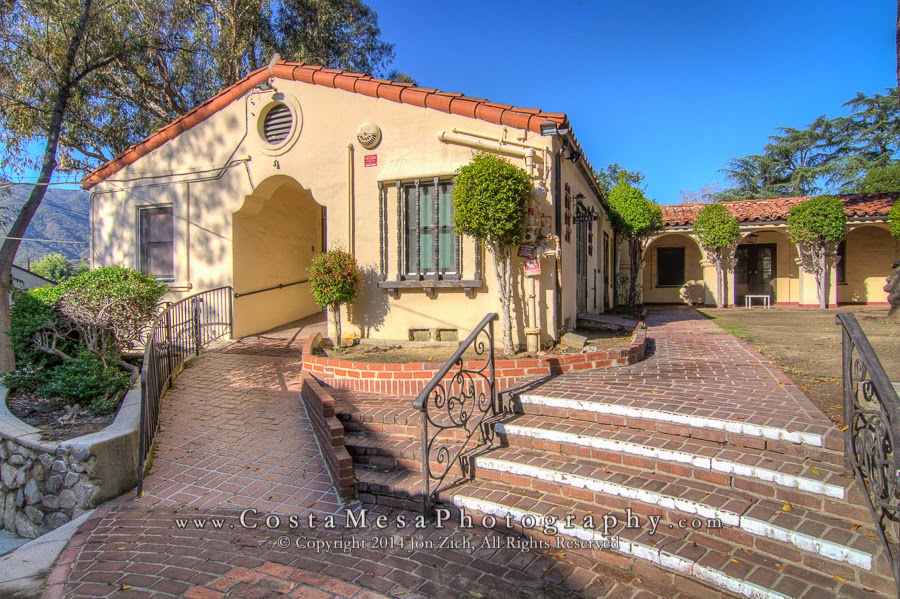 Please enjoy my photographs below.  My entire collection from today’s shoot can be viewed at:  http://www.costamesaphotography.com/SouthernCalifornia/Rockhaven-Sanitarium/

Another frigid morning in SoCal 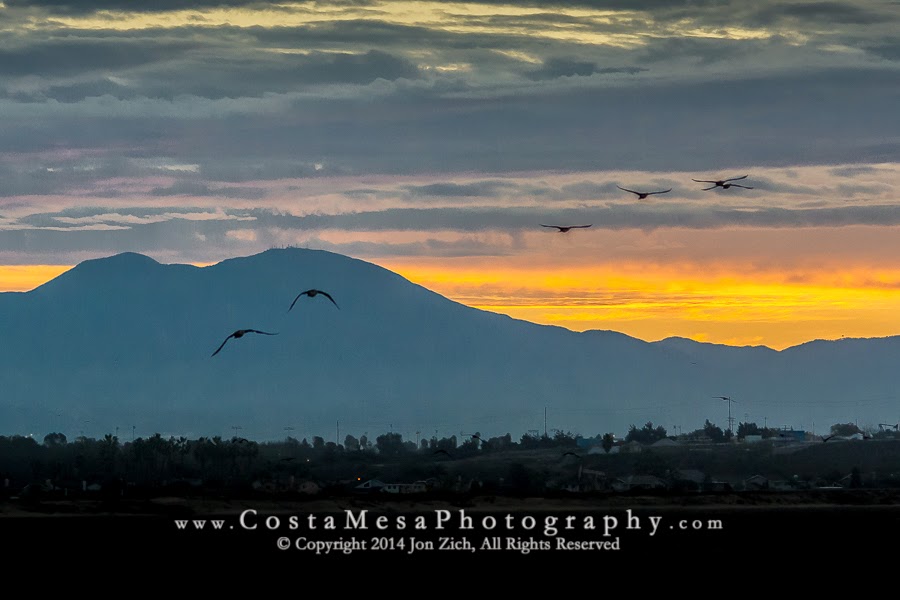 For southern California, it was a chilly morning, but I “braved” it in order to catch the first light of sunrise, and hopefully the early birding activities.  I definitely hit on a great morning for a colorful sunrise!  I also was rewarded with an incredible variety of birds.  I spent a total of three hours scouring the place for activity, and when all was said and done, I was satisfied with the days catch!  I even saw a round stingray, although my focus was not the best… 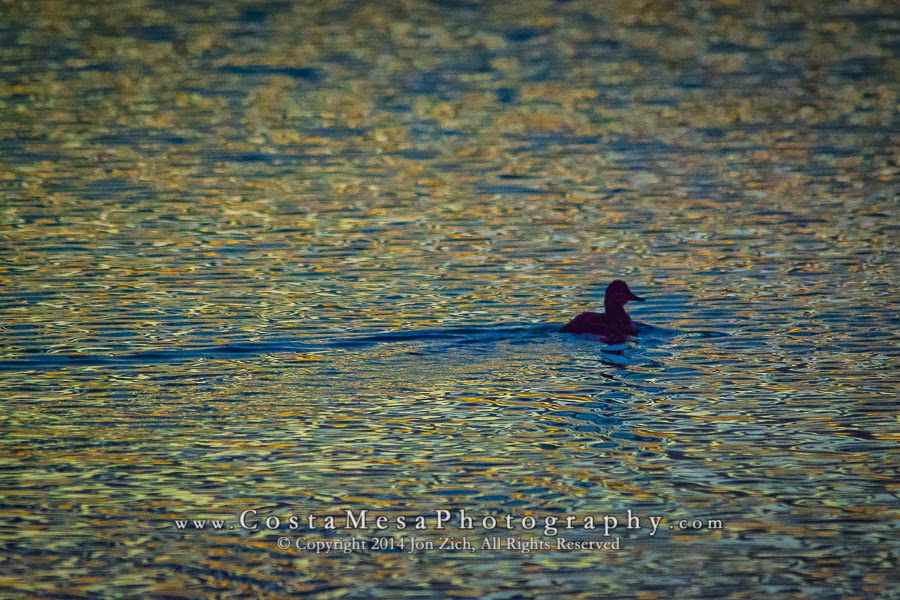 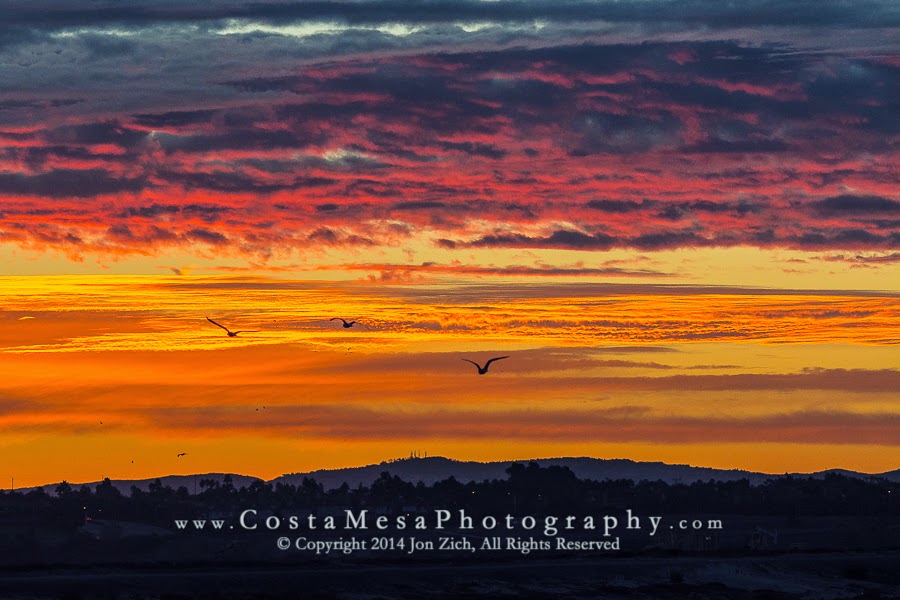