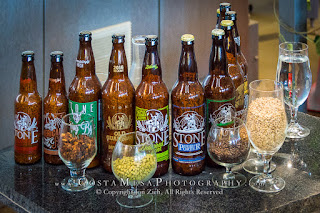 Like many businesses, Stone Brewery had its humble start in 1996 by Greg Koch and Steve Wagner, two friends who met several years earlier and learned that they shared a love for beer and a desire to start their own business.  The first keg of Stone Pale Ale sold on July 26, 1996 and the following year Arrogant Bastard Ale was unleashed.  Stone Brewery moved to their current facility in Escondido, CA, in December 2005 and opened the adjacent Stone Brewing World Bistro & Gardens in November 2006.  This garden area is complete with waterfalls, a koi pond, and plenty of seating for enjoying a pour of one’s favorite beer.  Stone Brewery began experiencing expansive growth and in 2013, opened their second farm-to-table restaurant, Stone Brewing World Bistro & Gardens in Liberty Station.  They also opened a location at Terminal 2 of the San Diego International Airport. 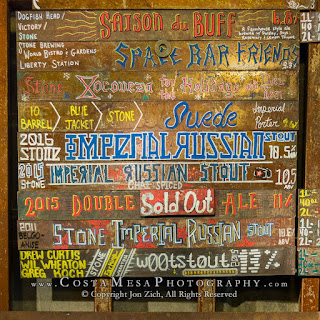 One of the more exciting and intriguing expansions was announced in 2014 with plans to be the 1st American craft brewer to independently build, own & operate a brewery—in Berlin Germany.  Stone Brewery prides itself on its many different brew styles, but in particular on its creation of new flavor profiles…this will certainly be something to challenge the very traditional beer culture of Berlin!

Yesterday was the first time I’ve been to Stone Brewery, or to any brewery for that matter.  We were scheduled for a late afternoon tour of the facility, followed by dinner reservations at their on-site bistro restaurant.  The entire place was hopping—this is certainly a destination for beer aficionados, and with sunny weather and warm temperatures in the 70s, it was understandably popular! 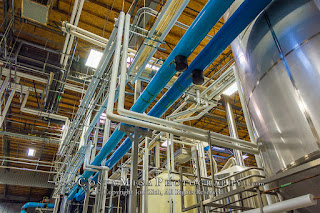 If one expected to see bubbling vats, swirling ingredients, rattling material carts, and clinking bottling lines or smell the pungent humidity of grains and yeast mixtures, then the tour might have been disappointing.  But if seeing a modern and clean facility, sparkling with stainless steel tanks, and interconnected with symmetrical patterns of piping, then this was the tour to be on.  Our guide was exceptionally knowledgeable and kept us entertained and attentive throughout (he even took group photos at a particularly interesting spot along the tour route).

But of course you know what this is all about…it’s not about the history, and it’s certainly not about piping and plumbing…it’s about tasting and drinking—and there was plenty of that!  Our tour included tasting of four different brews, and if that wasn’t enough variety (or quantity), there were more taps available than one could count…cheers! 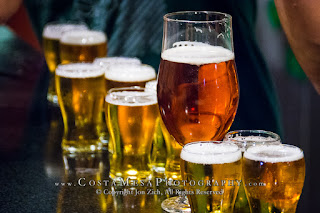 I just got back from another trip to Yuma, Arizona.  Not too many people have been there, and many who have have either stopped just for gas or food or have driven straight through it.  This was a destination trip though, and one that included some new discoveries (for me), of both historical significance, as well as the current vibe of the town…it’s surprisingly a happening place! 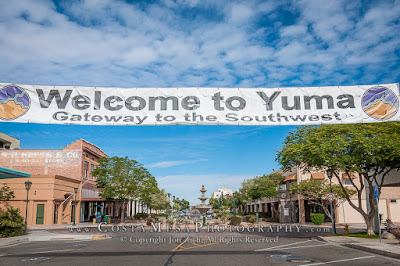 Yuma, Arizona is located in the southwestern corner of Arizona, just across the California border.  Very early expeditions saw the natural crossing of the Colorado River at this point as an ideal spot for a city, as the Colorado River narrows to slightly under 1,000 feet wide. The town, initially called Colorado City, was renamed Arizona City in 1858. The city was almost completely destroyed by the Great Flood of 1862 and had to be rebuilt on higher ground.  It took the name Yuma in 1873.

From the 1850s to the 1870s, the Yuma Crossing was known for its ferry crossing. From 1852 it was the major steamboat stop on the way up and down the Colorado River. Yuma served as the gateway to the new Republic (California), as it was one of the few natural spots where travelers could cross the otherwise very wide Colorado River. After Arizona became a separate territory, Yuma became the county seat for the area in 1864.  The Southern Pacific Railroad bridged the river in 1877. 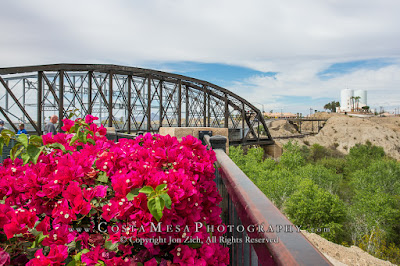 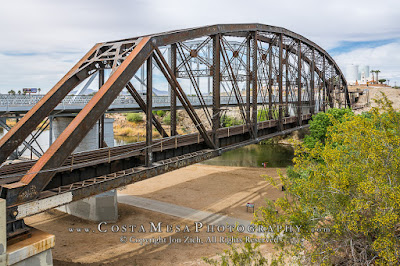 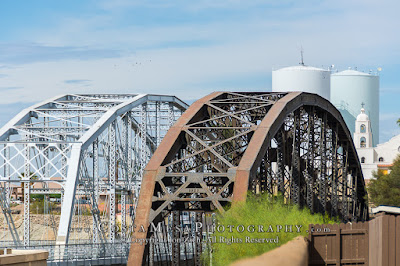 Just north of the Colorado River at this Yuma Crossing is The Saint Thomas Yuma Indian Mission.  It is a Catholic mission which was dedicated in 1923, and replicates the Mission Puerto de Purísima Concepción, which once stood on the site.  That mission was constructed in 1780 and was destroyed the following year during a raid and massacre by the local indians, frustrated by their treatment at the hands of the Spanish colonists. The site is California Registered Historic Landmark and a plaque on the site and statue of father Garcés commemorates the ill-fated mission. 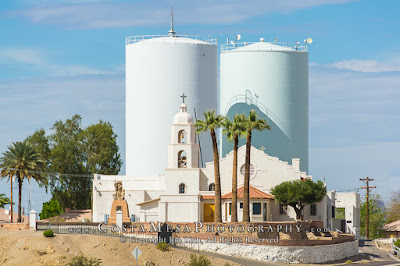 Just south of the river however is another very historic site.  It is the location of the Yuma Territorial Prison.  Opened in 1876 with the first seven inmates (who participated in building the prison), this prison was ultimately the home for over 3000 prisoners until it’s closing 33 years later.  Despite an infamous reputation, written evidence indicates that the prison was humanely administered, and was a model institution for its time. The only punishments were the dark cells for inmates who broke prison regulations, and the ball and chain for those who tried to escape. Crimes ranged from murder to polygamy, with grand larceny being the most common. A majority served only portions of their sentences due to the ease with which paroles and pardons were obtained. One hundred eleven persons died while serving their sentences, most from tuberculosis, which was common throughout the territory. Of the many prisoners who attempted escape, twenty-six were successful, but only two were from within the prison confines. No executions took place at the prison because capital punishment was administered by the county government.  By 1907, the prison was severely overcrowded, and there was no room for expansion. A new prison was built in Florence, Arizona and the last prisoner left Yuma in 1909.  The Yuma Union High School occupied the buildings from 1910 to 1914. 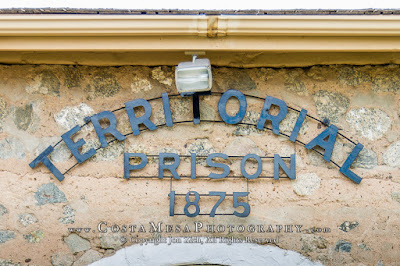 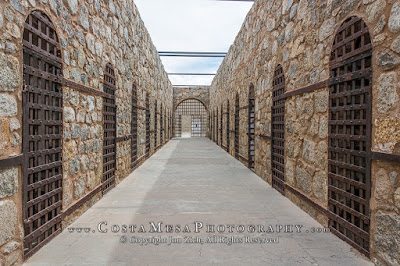 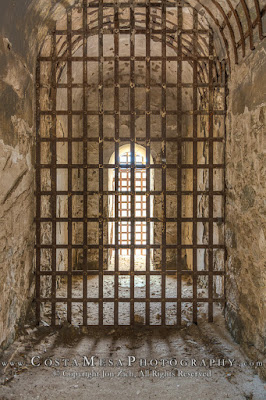 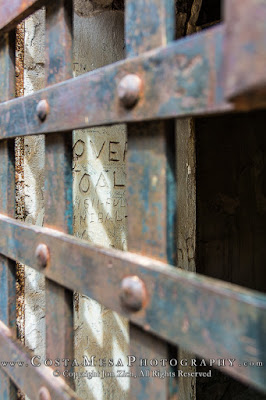 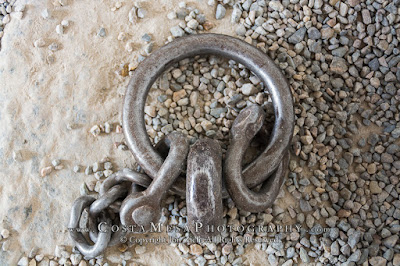 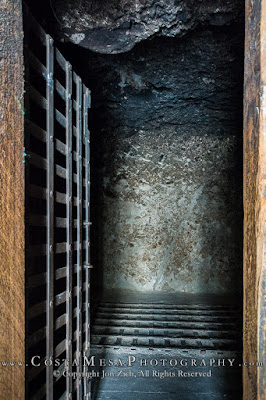 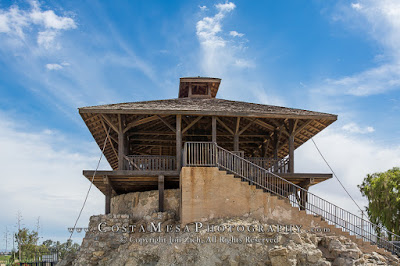 This is the view from the guard tower at the Yuma Territorial Prison. 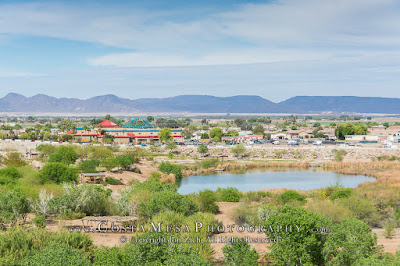 East of Yuma lies the Fortuna Foothills.  On one of its peaks lies a series of radio and communication towers.  A partially paved and quite steep service road winds its way to the peak and provides for a very popular hiking trail for the locals.  We planned to hike only partially up the trail, but went far enough to enjoy the scenery which included views of the city along with a variety of plans, most notably the Ocotillo.  Although not a true cactus, the Ocotillo is indigenous to the Sonoran Desert and Chihuahuan Desert in the Southwestern United States, and northern Mexico.  The bright crimson flowers appear especially after rainfall in spring, summer, and occasionally fall. Flowers are clustered at the tips of each mature stem. 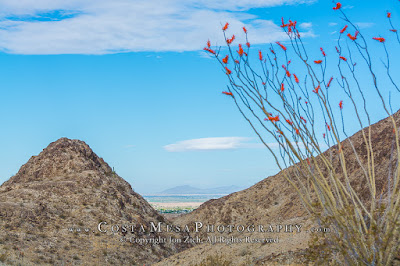 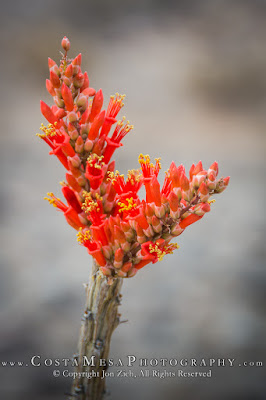 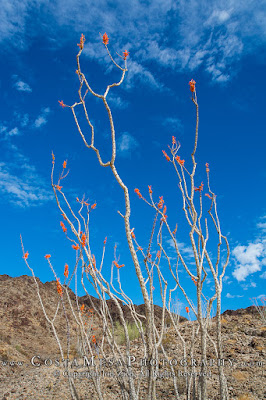 Along the hike there were also several Saguaro cactus present.  These are one of the defining plants of the Sonoran Desert and are large, tree-like columnar cacti that develop branches (or arms) as they age with protective spines, white flowers in the late spring, and red fruit in summer.  Saguaros are found exclusively in the Sonoran Desert. The most important factors for growth are water and temperature. If the elevation is too high, the cold weather and frost can kill the saguaro. 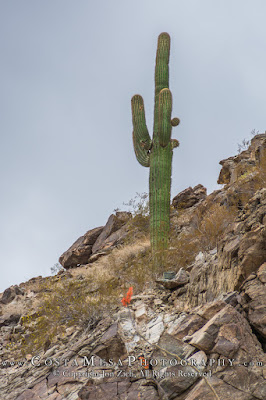 Back in Yuma, the downtown has experienced an amazing transformation over recent years and continues to evolve as a hot spot for both locals and tourists.  Boasting many shops, boutiques, and casual dining spots, the downtown are draws many to its doorsteps on a daily basis.  The Historic Yuma Theatre, originally built in 1911, was a vaudeville theater before it was converted to a movie house. Now restored, it serves as the centerpiece of the Yuma Art Center and hosts a variety of shows. Nearby is the somewhat misnamed Lutes Casino.  Though this Yuma original is called a “casino,” there isn’t (officially) any gambling at this pool hall, known for its “eclectic” décor and fun menu.  Nearby is The Pint House which features 45 brews on tap and an inventive foodie experience including a bacon appetizer that can best be descripted as hot bacon candy...  I had it and it’s unbelievably good!  And of course there’s Da Boyz, located in the renovated Kress Building.  Had some amazing pizza here along with an appropriate beverage! 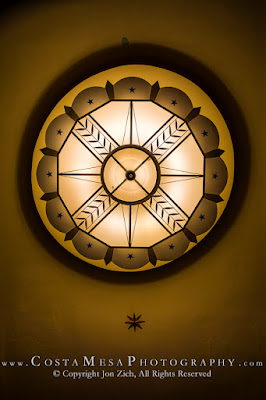 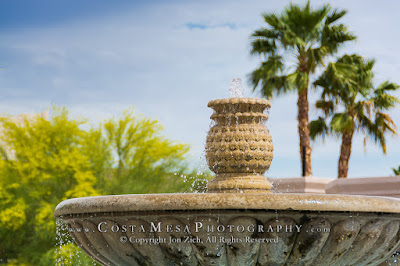 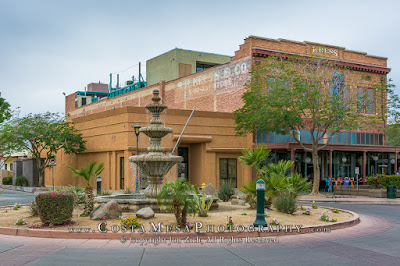 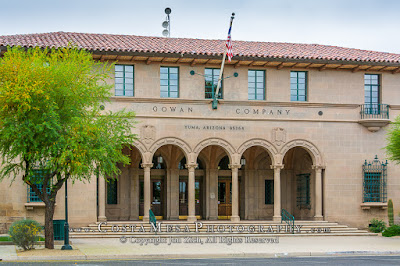 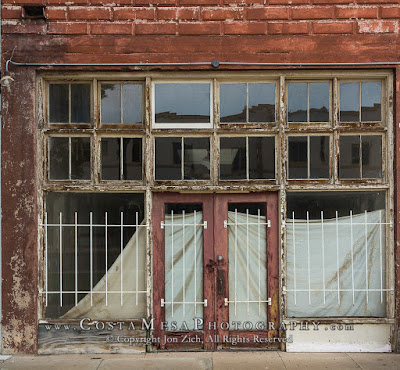 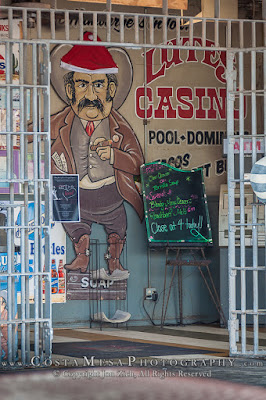 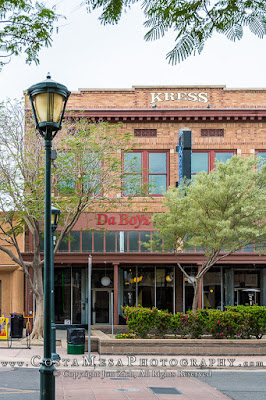 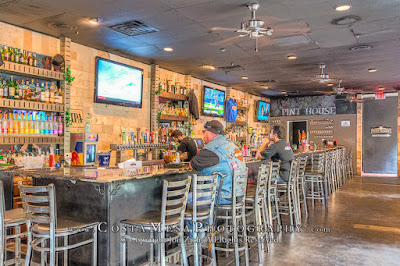 All in all, I’d have to suggest that if you haven’t been to Yuma, you should plan a weekend (or longer) there… preferable before summer though—it can get quite warm there!!