I made two dramatic changes in my "workflow" at the end of last year.  First of all, I purchased Adobe Lightroom.  I had been using Adobe's Photoshop Elements exclusively for both editing and organizing (Window version has a fantastic Organizer).  I jumped to Lightroom because I became infatuated with something in the Adobe Camera Raw Editor called the Targeted Adjustment Tool--unfortunately that tool was not available in the ACR that's compatible with PSE.  You needed to have the full version of Photoshop to have an ACR version that had the additional tool set.

That's when I began to seriously considered buying Lightroom--it's very much like ACR on steroids and not only had the target adjustment capabilities, but had multiple targeted adjustment capabilities.  Yes, it also has a powerful organizer/database capability, but I didn't buy it for that.  I've come to appreciate it however, but it's the RAW editing that I was after.  As you might have anticipated, the second major change I made was to start shooting everything in RAW instead of JPG.  There is an almost endless debate about which is better, and that debate is more rooted in the end use (from a quality standpoint) of your images and the amount of post processing involved--but there is no debate however in terms of which format has the greatest final image quality potential...RAW is the undisputed favorite of professionals and serious amateurs.

There is one drawback (or WAS) with shooting RAW and that is that from an editing standpoint, you're starting from scratch with a format that MUST be edited to give you a pleasing final result.  I found that I was spending considerably more time in post production because I had to edit every single image.  That's when I made a "discovery"...and exploited another powerful capability of Lightroom--presets.

I  have created presets (automated routines/scripts) in Lightroom for exporting but until now hadn’t seen a need for creating a preset in the Develop module, especially with all the creative ones already there.  But that was until my "aha" moment which came today...

What hit me was that in order for my Nikon (or Canon...) to generate JPGs, it starts with the very same RAW capture, applies a series of adjustments based on a very scientific and pre-defined algorithm, saves the JPG to your memory card in a reduced file size, and then discards the RAW capture.  What I realized was that if I could approximate what those changes/adjustments were, then I could save it as a preset, apply it to future RAW captures, and have a good starting point for further edits instead of starting from scratch with each and every image...and of course the advantage would be that my starting point would be on a foundation of RAW data which is far richer that what's in a JPG image (hence the difference in file size).

So, I went out to the backyard where I made a test shot with my camera set to RAW+JPG so that I’d be dealing with the identical image capture and could go back and forth to see an "A-B" comparison. From there, I went into the develop module and toggled back and forth between the two images, making adjustment to the NEF image until it was nearly identical to the JPG image.  At that point I created the preset.

Now, whenever I import my next batch of RAW images, I will apply that preset ON IMPORT (or after the fact is fine) so that at least when I start going through the images, I’ll have increased the odds that more images will be fine as-is, without further editing.

By the way, my image gallery is at http://costamesaphotography.com/   I'd be happy to have you look around and give me your feedback.  You can always email me CostaMesaPhotography@gmail.com 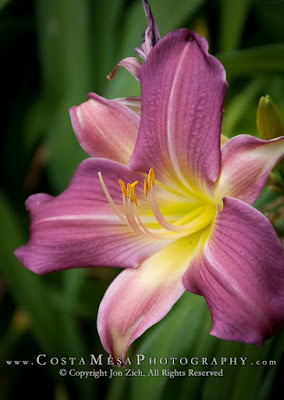 ﻿﻿﻿﻿
﻿﻿﻿﻿I have a new gallery for sharing my photography: http://costamesaphotography.com/

Is being a show-off a bad thing??  I don't mean the kind that brags, I mean the kind that's proud.  I enjoy sharing my pictures as much as I enjoy taking them.  But to share them takes a fair amount of effort--but it's work that I enjoy, and hopefully others enjoy the fruits of those labors.

What do I mean?

Well, do you know, or are you one of those photographers that will take a bunch of pictures, then get home and put the camera on the shelf?  Or maybe go so far as download your images, flip through them, and they go mow the lawn or watch tv and leave your photography for later, MUCH later??  Not me.


I'm anxious to go through my images, cull out the worst, massage the best, and get them out the door to all my family, friends, and neighbors.  I really like sharing the joy of my hobby...that's easily half the fun.  The work (if you call it that) is the post production efforts in Lightroom, Photoshop Elements, and Photomatix (my three tools of choice), to coax out what I think are the best attributes of my images.

With my new gallery, I'm able to share an almost unlimited number of images, and organize them in ways that will suit the mood of those visiting my sight.  I've tried to organize by location of my various photo shoots, as well as by subject or theme.  Just this organizing can be a lot of work.  You tell me if it's been worth it--I am open to all comments and suggestions:  CostaMesaPhotography@gmail.com