Leaving Moab was bitter sweet.  Such is the case with most travel--you love being where you are, and you treasure returning to the place you call home.  But well before getting there, our journey still has some pleasant surprises ahead as we venture the 7 hour drive back to Albuquerque.  This of course is the home I grew up in, but as a Southern California transplant, I'll still have an airplane ride ahead of me to what I now call home.

Our return road trip deviated from our way up to Moab, this time passing Shiprock New Mexico and then dropping in to Gallup New Mexico where we picked up Interstate 40 for our final leg into Albuquerque.  That last leg was not without its photo opp as we passed a vista of Laguna Pueblo, accessible from a raised turnout from the highway….but I’m getting ahead of myself.

Our first stop was in Monticello Utah.  This is one of those necessary stops prompted by drinking too much morning coffee...  Anyway, to a photographer, any stop is a photo opp, and while wandering around the filling station, I noticed a scene out back that beckoned for the creation of a photograph.  A church, surrounded by trees, cast against a mountain with snow--does it get any better than this?  For a photographer sitting in a car itching to press the shutter release, NO! 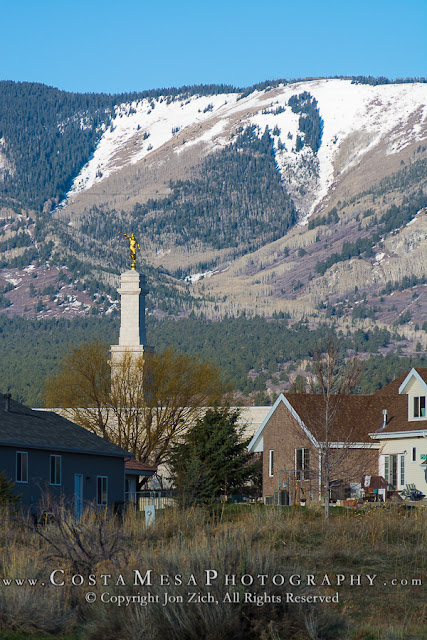 Ok, on to Shiprock...  The town of Shiprock is named after the nearby Shiprock rock formation, and is home to the annual Northern Navajo Fair, held every October.  Shiprock is a key road junction for truck traffic and tourists visiting the Four Corners, Mesa Verde, Shiprock and the Grand Canyon. The town lies at the intersection of U.S. Route 64 and U.S. Route 491 (formerly U.S. Route 666).  We stopped just long enough to get a couple of photos of the famous rock formation. 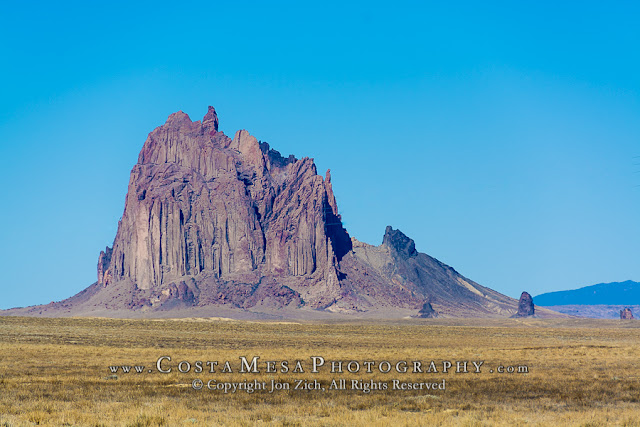 A short distance down the road, there was another amazing rock formation--and only the most discerning eyes will recognize that it's not Shiprock--it's Cathedral Cliff! 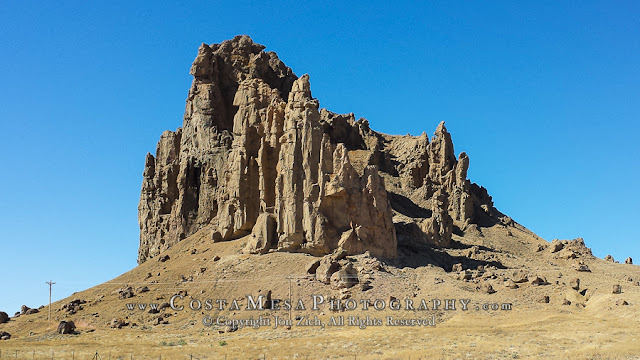 This area of New Mexico is vast, and it's barren.  It's a part of the country that gives one pause...why would people live here...what do they do...what are their stories...  So many questions, and from the highway, so few answers.  Yet, there they are, there they live, and a photograph forms the question...why? 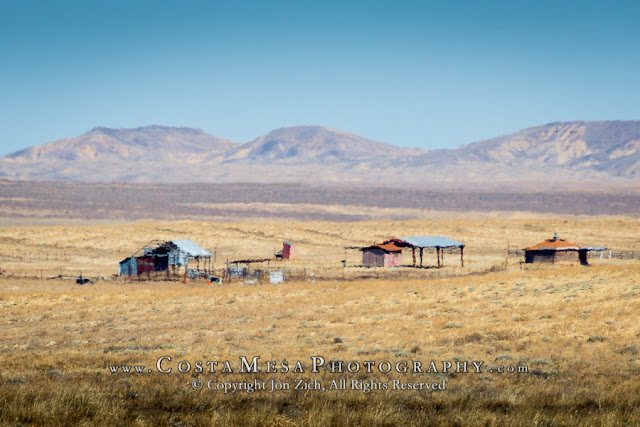 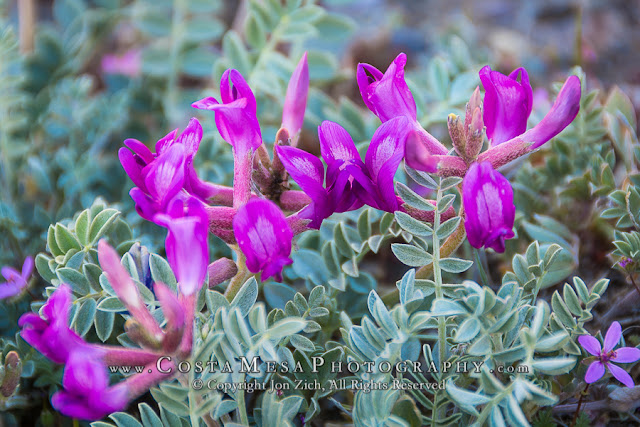 Finally we hit Interstate 40 and Gallup New Mexico.  Gallup was founded in 1881 as a railhead for the Atlantic and Pacific Railroad and is known as the "Heart of Indian Country" because it is in the middle of the Navajo reservation and home to many tribes.  This town has a rich cultural history and is a destination unto itself, but for us today, it would only be our lunch stop.  A quick search of special spaces to eat took us to a local café mostly frequented by the locals—Jerry’s Café.  I was in the mood for the quintessentially New Mexican green chile cheese burger.  I was not disappointed!  Will our bellies stuffed, we were prepared for the next, and almost final leg of our journey. 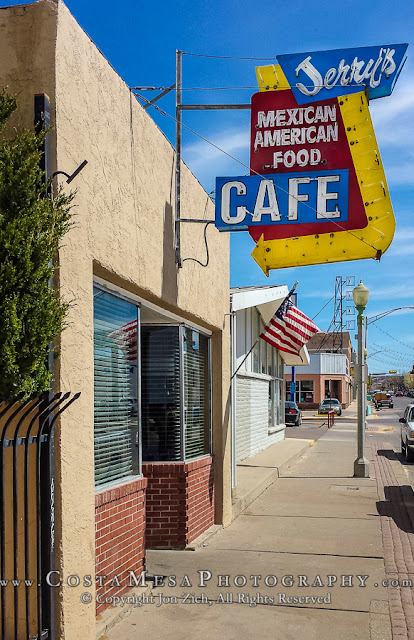 One very special photograph remains to be captures...  A year ago I had been on a drive to Albuquerque from the west coast and nearing Albuquerque noticed a small town on a hill just north of the highway.  Sitting prominently was the church…I learned later that this town was Laguna Pueblo.  At the time, I wanted to stop and create a photograph but I happened to be in the left lane and was blocked by a truck from escaping to a pullout that I was unprepared for.  Today’s trip would be different as I was on the lookout for this same pullout, and I stayed in the right lane so as to not miss it.  As I could see the pueblo appear, I was  excited to be finally getting a second chance…  After satisfying my last photographic interest, we dropped in to Albuquerque along its famous “nine mile hill”… 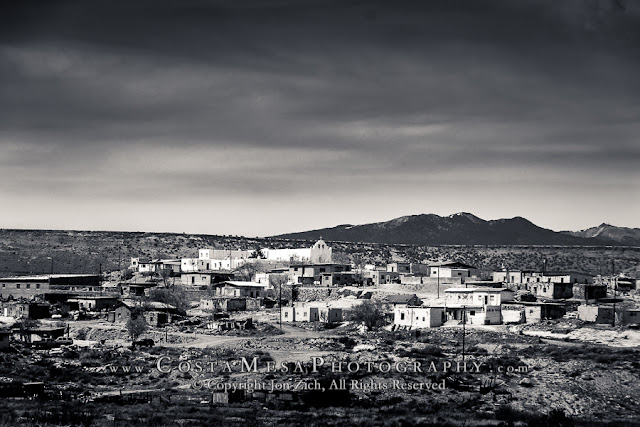 There is no real summary for this amazing trip other that the fact that with travel comes adventure, and if approached right, involves some amazingly positive experience.  This was one of those trips that allowed me to enjoy the company of a very old friend (i.e., I've known him for a long time) and enjoy some amazing photography and scenery with him.  A week is a short time, but the memories will last my lifetime.  Moab awaits my return!

Canyonlands National Park is also near Moab, but rather than the two-mile drive out of town to Arches, Canyonlands is about 20 miles away.  Canyonlands is approximately five times as large at over 500 square miles and preserves a landscape of canyons, mesas, and buttes created by the Colorado River, the Green River, and their respective tributaries. Legislation creating the park was signed into law by President Lyndon Johnson on September 12, 1964.

The park is divided into four districts: the Island in the Sky, the Needles, the Maze, and the combined rivers—the Green and Colorado—which carved two large canyons into the Colorado Plateau.  The Island in the Sky district attracts the majority of park users and is the most accessible by automobile. The Needles district is the second most visited. The rivers within the park and the remote Maze district each only account for 3 percent of park visitation due to its remote and vast network of unimproved roads and trails.   The Needles, Maze, and Rivers districts are all generally visible from the Island in the Sky district. 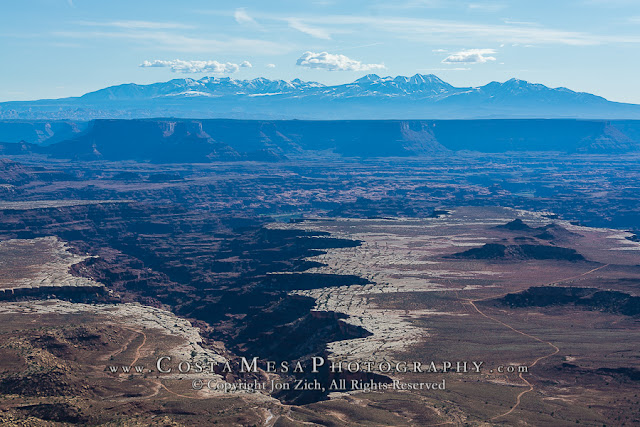 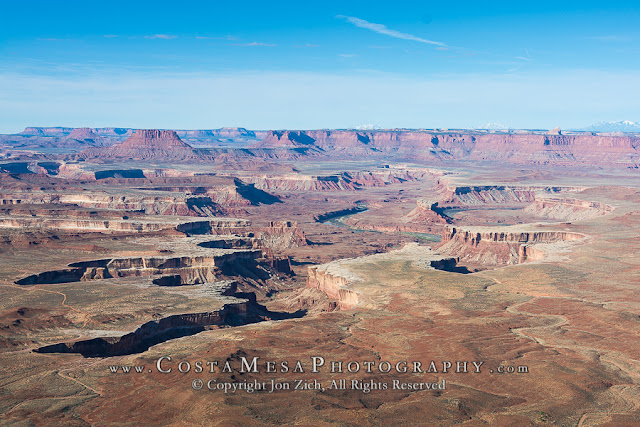 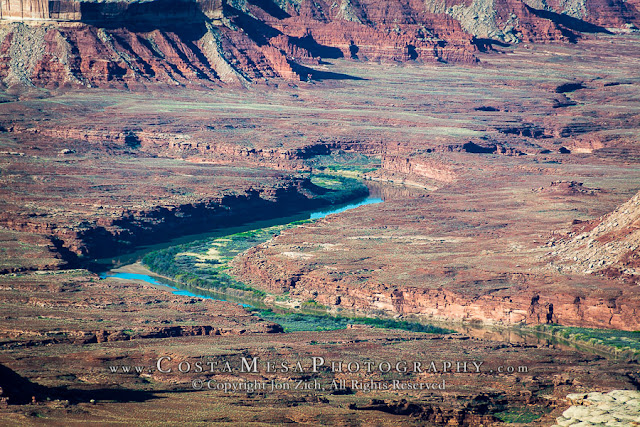 Our trip exclusively explored the Island in the Sky.  From the many turnouts, panoramic vistas of different landscapes were enjoyed and gave understanding to the vastness, scope, and variety of topographies that make up the park.  As far as the eyes could see in many directions…rivers, monoliths, and earth’s surface scared by desert storms, winds, and time...  As magnificent and grand as these vistas were, there were also many beautiful details.  Rocks, plants, birds and other details competed for attention with the more dramatic scenery on the horizon.

As we arrived at the rather unassuming park entrance (sans the normal visitors center), we saw a couple getting ready for their own exploration on mountain bikes.  The Islands in the Sky would be an enjoyable biking experience for most people due to its relatively flat paved roads. 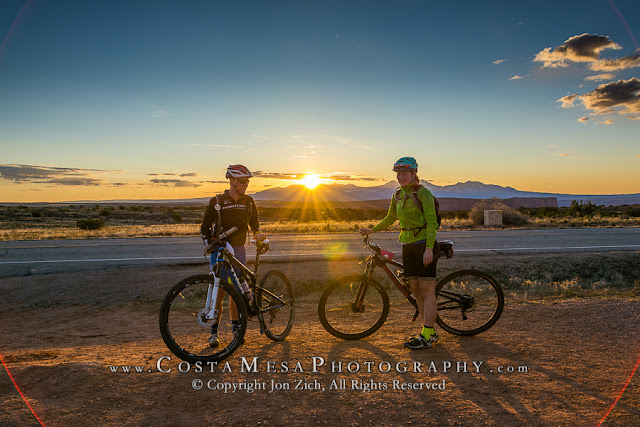 Although Arches National Park boasts having the majority of arches in this part of Utah, Canyonlands is known among photographers for another very special and scenic arch--Mesa Arch.  What gives Mesa Arch such an avid following is its combination of stunning vistas through the arch as well as its orientation to the rising sun.  We were content to arrive just after sunrise, but it not atypical for there to be as many as 20 or 30 photographers in a relatively confined space beginning pre-dawn, jostling for just the right spot to photograph the sunrise through the arch.  In the far distance are mountains and mesas, and somewhat closer in view is the Washer Woman Arch, named for its similarity to a woman washing garments by hand. 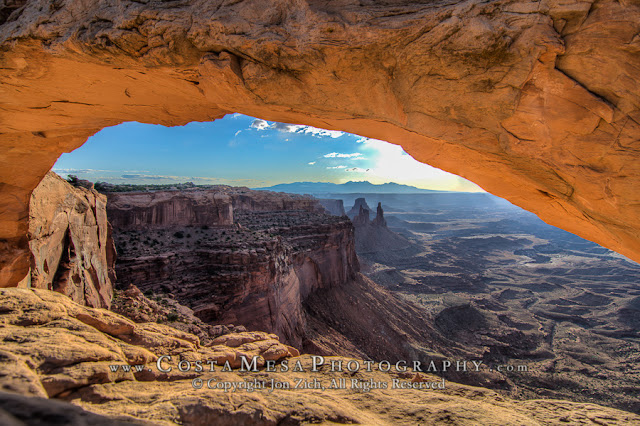 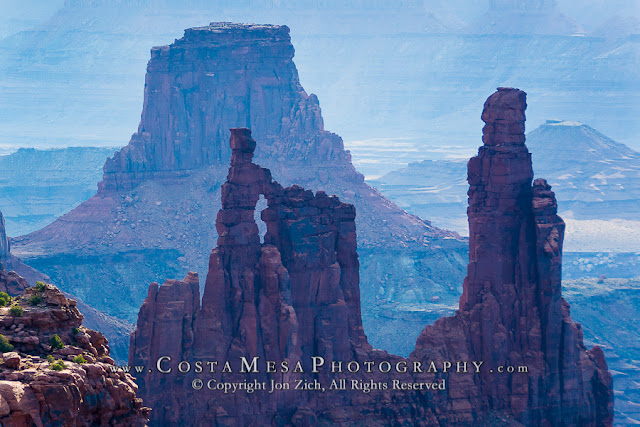 It was easy to be mesmerized by the sight of Mesa Arch and its surroundings.  Every subtle angle looking quite different and therefore compelling that more photographs be taken.  But alas it was time to move on and see what other surprises might await around the next corner...

Canyonlands seems more like that of a wilderness than a park, and feels much less improved and "directive", leaving the exploration and enjoyment in the hands of one's own time and curiosity.  I feel that we barely scratched the surface of the character and diversity of the park, and therefore shortchange the descriptions and narrative for those who haven't been and might consider visiting...  I can say with certainty however, that if you’re ever given the opportunity to visit the area around Moab, this park should be included in your plans. 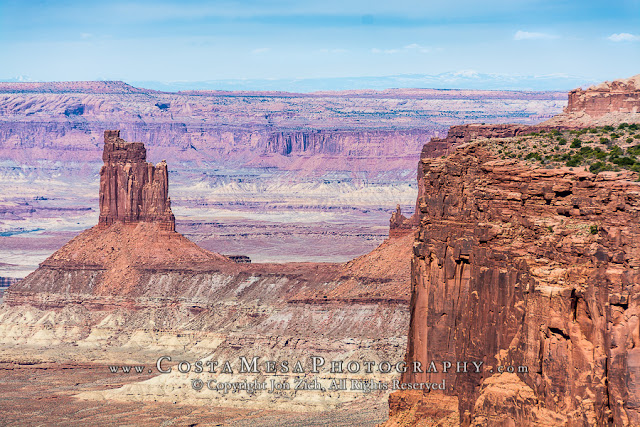 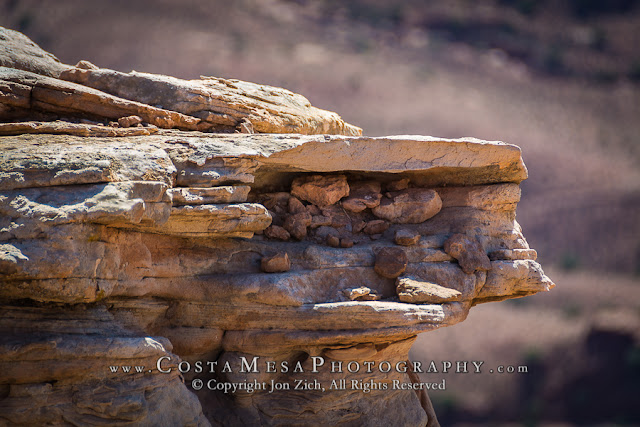 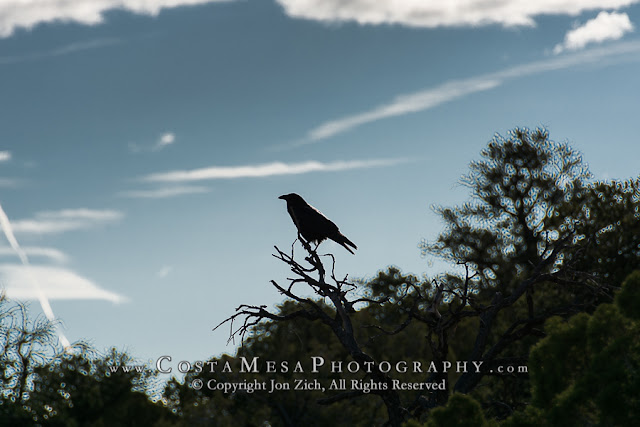 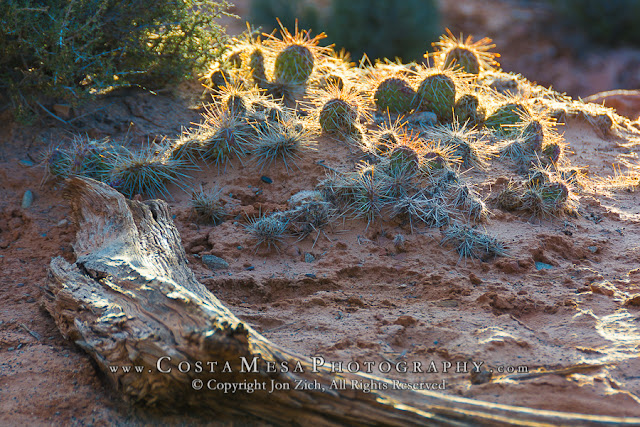 To see my entire collection of images for Canyonlands National Park, visit my website gallery at:  http://www.costamesaphotography.com/National-Parks/Canyonlands-Utah/