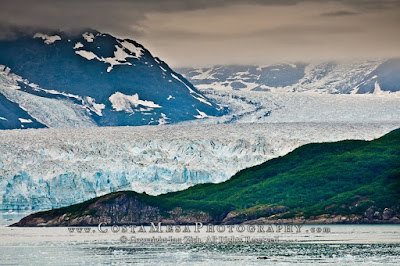 According to the USGS, Hubbard Glacier is the largest tidewater glacier on the North American continent. It has been thickening and advancing toward the Gulf of Alaska since it was first mapped by the International Boundary Commission in 1895 (Davidson, 1903).

This is in stark contrast with most glaciers, which have thinned and retreated during the last century. This atypical behavior is an important example of the calving glacier cycle. If Hubbard Glacier continues to advance, it will close the seaward entrance of Russell Fjord and create the largest glacier-dammed lake on the North American continent in Historic times.

This was our first official stop after leaving port at Seward.  After entering the initial ice flow, our speed slowed to an imperceptible crawl as it took another couple of hours to actually get to the closest point the captain was willing to approach.  From this vantage point, we were able to see some calving, but more than that, we were able to see the drama of scale, colors, textures, and experience first hand the marvel and wonder of glacial flow.  The crowds on the upper ship decks were initially full, but after the two hours approach, many went below deck where it was warm (and where all the food was no doubt!!).

This was when the real magic started for me.  There were only a handful of us remaining, and it was completely quite and it seemed as if the air couldn’t have been cleaner and the water couldn’t have been colder (it actually had a surface that was a crystaline sheen of icy water).  This was an inhospitable place, yet there were birds, sea lions, and greenery on the steep hills…and of course the several thousand of us visitors on the Celebrity Millennium.

Feel free to drop me a line and let me know what you thing...  CostaMesaPhotography@gmail.com