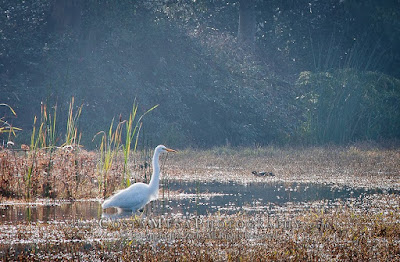 I have obsessed on and off over the last year about the sharpness (or lack thereof) of my 70-300mm lens.  It wasn't so much that I was dissatified with my images, it's that recently I've been admiring the images of another photographer friend whose images are tack sharp.

So over the last couple of weeks, I've been conducting a number of tests, shooting by myself, and asking friends to send me specific shot sample with their gear.  In a real sense, I've been conducting experiments.  I've been shooting with vibration reduction on an off, with super-fast shutter speeds, and slower shutter speeds that support a small aperture.  I don't have any other objective than to learn.  To learn about my equipment, and to learn more about the techniques to get the most of out it.

As part of my experimentation, I went on a photoshoot to a local city park with a friend who had a lens similar to one I wanted to test.  We spent a couple hours walking around, changing lenses, and just shooting at anything interesting.  Since I was more focused on the experimentation around technique and equipment, my creative side was freed up from the pressures of trying to get that great "money shot".  Consequently, I got quite a number of interesting images.

My experimentation is not complete yet, but I wanted to encourage you to start your own experiments.  Grab your camera, grab your gear, and go to work on something.  Explore a concept, a feature, a technique, to just play around and hope for that happy accident.  Sometimes the most fun learning is that which comes from teaching yourself.