Hey, I Found Out I'm a Photo Stylist Now!!

One of the great joys in photography is seeing one of your images printed, published, and shared.  Next to that is the joy of helping someone else get their image published.  Such was the case this week when a fellow photo club friend of mine had his image appear as a two-page spread in the July 2013 issue of Angelino Magazine.  A nice article accompanied the photograph and credit was given in the magazine to the photographer and to the "stylist"…that would be me!!

How all this started is a fun story.  I saw my friend post some images on social media a couple of months ago from a trip he made to the Getty Center.  One particular image caught my attention as having incredible potential.  It was already a great photo, but I saw some things that I would edit if it were my image,  and I also felt that a black and white version would make for an interesting presentation.  So I took a screen shot of his image, applied my edits, and sent it to him suggesting it as an alternative interpretation. 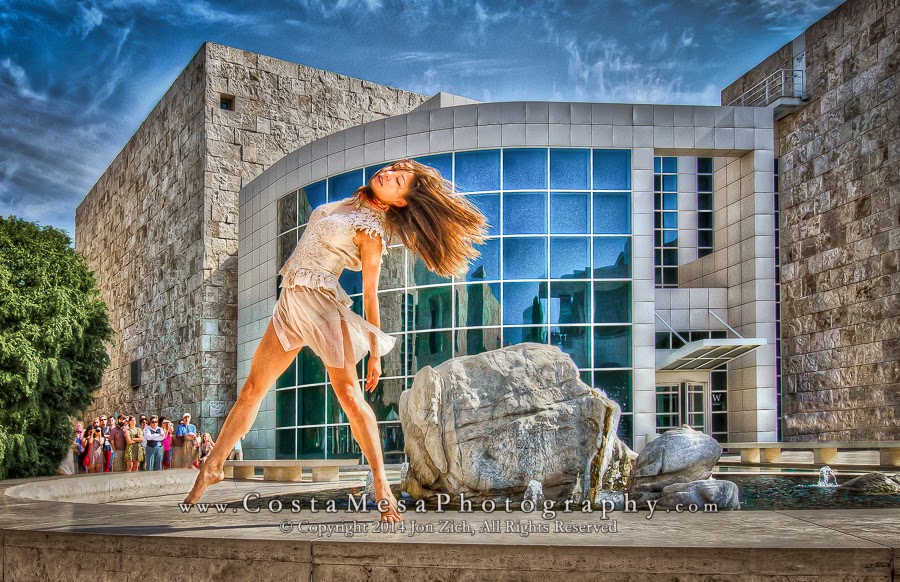 My first step was to perform all of edits (retaining the image's color).  I tonemapped that image as well to enhance the color saturation, luminosity, and overall tonal range...fairly radical edits.  Once I finished that, I converted the image to black and white and gave it some additional tweaks.  Sometimes people are put off by you touching their art this way, but thankfully he was delighted, and in fact was so happy with what I had done, that he thought the dance troupe might be interested in seeing it.  That turned out to be an understatement.

Once the dance troupe saw the image, I understand they were so excited that they got in touch with the Angelino Magazine editors who also like it and decided they wanted to run it as a two-page spread in their next issue.  Once they contacted me for press-ready artwork, I went back and got the original image from my friend so I could recreate the edits and post processing changes on a full resolution image file.  The rest is history…the image looks spectacular in the magazine, and I was thrilled to have had a small part in the accomplishment of helping my friend get published.  He has been very generous in sharing the spotlight with me--great photographer, great character.

By the way, if you're interested in checking out the on-line version of the July issue of Angelino Magazine, you can follow this link:  http://media.modernluxury.com/digital.php?e=ANGE  The image can be found on pages 24/25 with the credit give to the photographer and the "stylist" on page 12.

As always, feel free to drop me a line at CostaMesaPhotography@gmail.com  if you have any comments or feedback.