Don't Underestimate the Importance of Technique 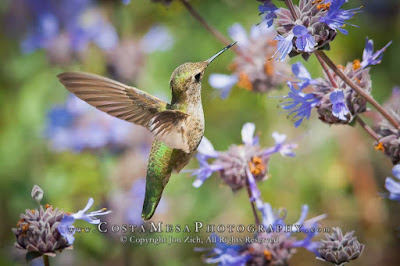 It helps to have top-of-the-line gear, but if you don’t know how to use it, it won’t matter.  I learned this valuable lesson recently after admiring images of hummingbirds that a friend of mine had taken.  I went out to shoot some of my own, and the results were well below my expectations, and didn’t come close to the quality of my friend’s shots.

Clearly it was because my lens was no good, right?  It couldn’t be me, it had to be the equipment.  After taking my lens to the , I got back the embarrassing report two weeks later that there was nothing wrong with my lens…really?  So, I started doing some research and found other users on the web who had the same lens that I did.  Some of these users had the sort of incredible shots that I was after.  What was their secret?

I contacted several of them to see if they would share.  They responded with the various setting that they used on their cameras when making their bird-shots.  They were using the continuous focus mode (AF-C on Nikon), and also the Single Focus Point.  They were also using f/8.0-11.0 which is the sweet-spot for most lenses in terms of sharpness.  A fast shutter speed along with shooting in “burst” mode completed the picture. These were settings that I was familiar with, but in no way understood how important they were to the particular challenge of telephoto photography of birds.  I couldn’t wait to get back out there and try what I had learned.  Guess what...the results were significantly improved.

Still, there was a gap between my images and those of my friend’s.  That’s when I turned back to my lens and compared it to the lens my friend was using.  Hers was a top-of-the-line lens.  Mine was mid-level.  More research revealed that people with my lens were upgrading to better telephoto lens.  Further research narrowed my interests down to a couple of lenses.  Ultimately I settled on a Sigma 150-500mm HSM.  Wow!

With my new found techniques in place, and with a new lens on the front of my camera, I was ready to go out and see what I could find…  The above image was one of several that I captured on my first test-drive.  I’ve pretty satisfied that I’m on the right track again.  To summarize, you need good equipment, but don’t underestimate the importance of proper technique!

If you have any comments or questions, drop me a note at CostaMesaPhotography.com  You can see more of my hummingbird shots on my website gallery at http://costamesaphotography.com/